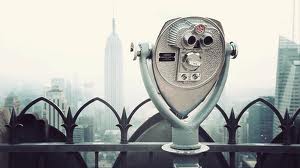 Album Review - It's About Time 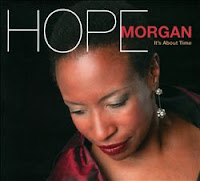 One of the things that makes America special to me is its music.  Jazz, in particular is uniquely American and has so many variations and styles that one can listen to the artists over its history and see how creative and special this form of music is.   We’ve had the good fortune of experiencing Jazz starting with the Dixie land craze in the early 1900’s, then big-band swing, then be-bop, then fusion, and on and on and on.


Every once in a while an artist comes along that captures our attention and makes us sit up and listen.  The jazz artist that knows their craft can take a standard you’ve heard hundreds of times and make it their own.  Phrasing, time, breathing and improvisation are tools the jazz singer employs to take a familiar friend of a song and turn it in to something new.  The album I’m reviewing today; “It’s About Time” is one of those albums.  The singer who has started with several songs you’ve heard before and created something new is Ms. Hope Morgan, a wonderful storyteller who has put forward an album that should be in every jazz fan’s collection.


Ms. Morgan’s voice is crisp and clean, with phrasing that is reminiscent of great singers of the late 50’s and 60’s when jazz vocalists were really coming into their own.   The play list on the album has a variety of styles keeping the listener’s attention with songs of different rhythms, different moods and different tempos.  The songs on “It’s About Time” fit Ms. Morgan’s voice well, and there is no point on the album where you think a song is out of place.  Listening to the album you get love, sorrow, memory, and happiness, which is what every good jazz vocalist should strive for.


Play the album and you’ll hear hints of Ella Fitzgerald, Sarah Vaughn, Diana Reeves and Julie London.   Ms. Morgan doesn’t imitate, rather her style is reminiscent of these excellent singers and she is in my view right up there with them in terms of talent.  I hope to hear more work from this excellent artist very soon.


The tracks on “It’s About Time” are reviewed below:


“It’s About Time” is released on HLM Records and the album can be found on iTunes.  Total time on the album is about 56 minutes.


1.        Well You Needn’t – 3:20 – Composed by the great Thelonious Monk in 1944, this jazz standard leads off the album with an up tempo delivery by Morgan that gives us the first hint of what’s to come with the rest of the record.  The band behind Ms. Morgan is tight, with subtle bass and piano supporting a great sax solo through the middle of the tune.  Listen closely as you’ll hear homage to Sarah Vaughn in this.  It’s a great song to kick off the album.

2.       All Blues – 7:24 – Composed by Miles Davis and released on “Kind of Blue”, which in my opinion is the greatest jazz album ever recorded.  It’s definitely on my Desert Island Disc list.   A 12 bar jazz masterpiece, Ms. Morgan and her group do Miles great justice.  I had never heard the lyrics (written by Oscar Brown Jr. later) to “All Blues” before, and didn’t think I would like it.  However, the opposite is true.  Morgan’s voice replaces Mile’s trumpet on the tune and it works well. Sometimes, when you hear a tune you’ve associated with just being an instrumental and lyrics are added, it seems to crowd out the music.  Not here though. The words are woven in with the music so well it fits and seems natural.

3.       Lush Life – 6:21 – One of my all-time favorite jazz songs, this tune was written by Billy Strayhorn in the late 1930’s.  The story is of one tired of the “night-life” after a failed romance.  Ms. Morgan’s version brings out the hurt, the melancholy, and the resignation of Strayhorn’s words.  A great version of a timeless standard.


4.       Out of this World – 5:26 – by Harold Arlen and Johnny Mercer.   This arrangement brings a robust bass line jumping off the launch pad right when the song begins, and the Latin tinged rhythm along with Morgan’s soaring vocals makes this a tune you want to dance to.  Think of the show “Mad Men” and martinis being quaffed in a small bar in New York in the early evening and you’ve got the picture.

5.       The Island – 3:42 – by Bergman/Lins/Martins – A little Caribbean picture story with the couple on a small desert island basking in the moon light.  Tight and crisp, the band and Ms. Morgan will have you humming along on this one wishing for a Daiquiri.


6.       Sugar – 5:06 – by Stanley Turrentine – Ms. Morgan takes off on this.  You get a great sax riff to start off and about a minute and twenty five seconds, we hear Ms. Morgan “scat”.  Reminding me of great improve singers like Ella, Morgan takes this tune through the middle eight with a great bebop scat that gives way to the sax taking the tune back around through the deep bass line and returning to Ms. Morgan to finish it off.  As the title would indicate, this song is sweet.

7.       Dindi – 4:25 – by Antonio Carlos Jobim, “Wind that speaks to the Leaves telling a story that no one believes” is a great line in this song.  The song starts off with a small little tune about the clouds in the sky and moves then into a cool little Bossa Nova where Morgan is looking for her “Dindi” (pronounced Gingee).  The backing band does a great job of giving us a picture of being in the Bahamas or perhaps Rio.


8.        Afro Blue – 5:39 – by Mongo Santamaria’   I remember Coltrane’s version of this, but again, with the words being brought to us by Ms. Morgan, the song is a much richer and vibrant picture of a time long past.


9.       If You Go – 5:01 – by Tokarsky/Bennett/Levis/Saltzman/Campbell – I first heard this on an old Peggy Lee album produced by Quincty Jones.  It’s a quiet little tune with a great little flute backing up Morgan’s soft and sorrowful vocals.


10.   Beautiful Love – 5:06 – by Van Alstyne/Young/King/Gillespie – Perhaps my favorite tune on the album. It’s simple, with a wonderful vocal by Ms. Morgan and a great sax in the middle eight.  However, Jeff Hellmer’s piano work is what makes this song for me.  Very familiar sound on the piano, it reminds me of the great Ellis Marsalis and provides a background for Morgan’s singing with a framing of the song that is simply superb.


11.   Jitterbug Waltz – 5:23 – Ms. Morgan starts off with a high scat bringing us back down to a tight little tune.   Listen for the flute in the middle eight giving over to the piano and once again back to Ms. Morgan singing “Nothing to do but waltz”…


Ms. Morgan is a great talent, and I hope to get to see her live one day. I’d be remiss if I didn’t mention her terrific band.  The group is tight and smooth, with cool oozing from every note.   I really  enjoyed  this album and know you will too.   GO GET THIS ALBUM.

I've removed moderation from the comments, so you all be nice out there please. Don't get rude or profane, or I'll have to put moderation back on and I don't want to do that. Enjoy our Webzine and participate. Thanks - The Editor.